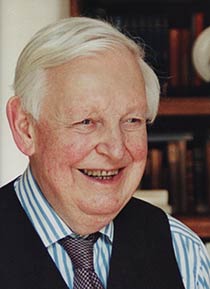 Alexander reasoned that this awareness allowed individuals to adjust unconscious bodily habits into new patterns which offered a number of physical and mental benefits. For more than 60 years Carrington made an immense contribution to the preservation and development of the teaching of the technique.

Walter Hadrian Marshall Carrington was born in Selby, Yorkshire, in 1915, the only child of the Rev Walter Marshall Carrington. In 1917 the family moved to London where he spent the rest of his life. He attended St Paul’s School.

He had intended to join the Society of Jesus but he was so impressed by the lessons which his mother had taken in the Alexander technique that he started taking lessons himself. In 1936, he joined Alexander’s teacher training course and he qualified in 1939.

He married Dilys Jones in 1940 and, the following year, qualified as an RAF pilot, serving in the Pathfinders. He and his crew survived being shot down over Hungary in 1944, but were taken prisoner. Carrington had broken several bones, including his pelvis, and was sent to a military hospital from which, however, he eventually escaped.

On demobilisation with the rank of flight lieutenant in 1946 he rejoined Alexander’s practice in London where he gave lessons and taught on Alexander’s teacher training course. Fifty years later he published A Time to Remember: A Personal Diary of Teaching the F. M. Alexander Technique in 1946, which provides insights into Alexander’s methods and personality as well as conveying the atmosphere of the time.

In those early days Carrington also taught regularly in Cardiff, Guernsey, Oxford and Nottingham. After Alexander’s death in 1955 Carrington and three other teachers carried on the training course according to Alexander’s methods.

In 1960 the course moved to Holland Park, London, where it remains, and was renamed the Constructive Teaching Centre,with Carrington and his wife as its directors. The training course grew with the upsurge of interest in the technique in the 1970s and it became the largest operation of its kind in the world, with up to 45 students each year from the 1980s onwards. Around 300 Alexander teachers have qualified from the centre.

The problem facing teachers who carried on courses or started new ones after Alexander’s death was how to provide training in the absence of the founder of the technique. Carrington refused to become a “master” whose words would be taken as absolute; instead, he developed a training programme which respected the autonomy of each student and which encouraged questions and explorations.

The process of teaching was adapted to the needs of individual students who were treated as equals. Instead of adopting a pre-existing teaching approach (as in, for example, the traditional classroom model), the Carringtons evolved a way of teaching and training in accord with the principles of the Alexander technique itself. Their methods have been taken up by training courses throughout the world.

Carrington was an inspirational teacher because he embodied the principles of the technique in his own life. His dedication to the technique helped him to overcome many difficulties. Because of his war injuries he suffered periods of severe pain during the 1970s. Despite this he retained an optimistic outlook, and the pain eventually disappeared after three operations.

Carrington taught from 9am to 6pm, five days a week, until he was 80, at which age he reduced his hours. Horsemanship, including dressage, was among his lifelong interests. He continued to ride until the age of 87 and was still teaching until shortly before his death.

Though without a formal scientific training, Carrington took a keen interest in scientific developments of relevance to the Alexander technique: he kept his students informed about papers on posture, balance, human and animal movement, and related subjects, whenever he thought they made a valuable contribution to the practice and theory of the technique.

In keeping himself up to date with Alexander technique literature, Carrington amassed what is thought to be the largest collection of books, papers and articles on the technique in the world today. His phenomenal memory of the history of the technique, and his readiness to grant others access to his library, were tremendously important for researchers – two recent biographies of Alexander owe much to him.

Carrington published two collections of lectures, Thinking Aloud (1994) and The Act of Living (1999), in which he discusses such matters as breathing, the balance of the head, the effects on the body of gravity, habitual behaviour, ethics and many other topics related to the development of physical wellbeing and the consciousness of self. These transcribed impromptu talks, erudite but always accessible and jargon-free, capture the flavour of what one observer described as Carrington’s “gentle, almost hypnotic, quiet rhetoric”. For his students and others, Carrington was also their living link to Alexander himself.

© The Times, London, 10 August 2005. This article may not be copied or reproduced without the prior permission of the copyright holders.