Breath, Emptiness and Happiness: More Work with the Whispered Ah

When we were first taught the Whispered Ah, part of the procedure (or game) will have been a ‘smile behind the eyes’ or ‘happy thoughts’. British people are mostly rather resistant to the notion of producing happy thoughts on cue, and FM doubtless knew this, so it must have had value for him to require it of his pupils. We will be looking at how memory and thought changes the experience of facial posture and breath, and how these three are connected.

The Whispered Ah brings many students (including teachers) to the coal-face of psychophysical unity. It is a gentle and powerful tool for dissolving the habitual shell of armor that limits change. Resistance to releasing the breath is closely bound up with the experience of vulnerability, and one of the beauties of teaching the Technique is that it is an invitation and never an imposition. (To paraphrase Frank Pierce Jones, change will come at the pace that the organism can assimilate it, and no faster.) We will therefore look not at what we ought to be doing in this procedure, but rather, at some directions in which the Whispered Ah is leading us.

This four-hour workshop will include:

There will also be some flexibility in the schedule to work with any particular questions on breath and the Whispered Ah that participants wish to bring. 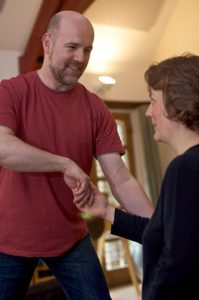 Patrick Ardagh-Walter trained as a violinist at the Royal Academy of Music. Joint pain put an early end to this first career, but it led him into singing and to his first encounters with the Technique.

After spending thirty years singing and, later, teaching singing, Patrick moved to Oxford in 2006 to train with Stephen Cooper. Soon after graduating, he began working in hospices and found the relationship between patients’ use in breathing, and their levels of pain and anxiety a rich area of exploration. After studying privately in New York for a while with Lynn Martin, he undertook training in Lausanne with Lynn Martin and Robin De Haas and is a practitioner of Breathing Coordination MDH, a development of the discipline developed by Carl Stough in America.

Alongside his private practice Patrick continues to sing, with regular work at The Royal Opera, in concerts, recordings, radio and films. Until recently he was Dean of Faculty and teacher of voice and AT for an annual summer program training young American actors to perform Shakespeare on stage. Patrick moved to France this year with his husband, to establish a centre for retreats, growth and learning in Normandy. www.la-scellerie.com